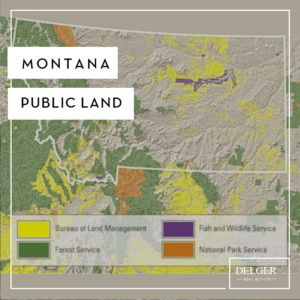 Much of the land in Montana is owned by the government, either the Bureau of Land Management, or the National Parks and National Forests (these are Federally owned). Montana is a large state, comprising over 94 million acres. Approximately 30 million acres of this is public land. This includes Forest Service, State Land, and BLM. On top of that Montana has the BMA(Block Management Area) Program.

National Parks: Glacier and a small piece of Yellowstone are in Montana. They are administered by the National Park Service, an agency of the Department of the Interior. Virtually no development is possible in the National Parks except very limited activity associated with tourism.

State Parks: There are 54 State Parks containing 46,000 acres. Trust lands are “properties managed by the Montana Department of Natural Resources and Conservation (DNRC) for the sole purpose of generating income for public schools and other public institutions”.

Army Corps of Engineers: The Corps of Engineers is at least one of the entities managing the 1,000,00 acres of the Fort Peck Dam/Charles M. Russell Wildlife Refuge. Camping, boating, fishing, hunting, sightseeing, and wildlife viewing are allowed.

National Forest: There are around 12 different national forests in Montana. Generally these lands are managed by the Forest Service, but certain components are managed by the Bureau of Land Management- mineral leases, for example. National Forests, like BLM land below, are managed for mixed use and sustainability. Activities like gold and other mineral exploration, cattle grazing, timber cutting, hunting, camping, fishing are balanced and managed in attempt to allow all to utilize the national forests and yet preserve these lands for future generations.

BLM: The BLM’s mission is to “manage and conserve the public lands for the use and enjoyment of present and future generations under our mandate of multiple-use and sustained yield.” The Bureau of Land Management. BLM lands are managed in much the same way as Forest Service lands, but also contain grasslands.

Tribal lands: There are seven Indian (Native American) Reservations in Montana, 4 that are over 2,000 square miles, covering close to 10% of the state. Technically Native Americans could develop these lands, but there are multiple factors (economic, regulatory, cultural) that severely constrain development possibilities. Reservations in Montana are different than other parts of the country, such as Oklahoma, where over time the boundaries between reservation and non-reservation lands have blurred. In Montana, the lines are very defined. Native Americans and the federal government maintain a great deal of control over activities within reservation boundaries.

Railroad Land: Land that was given to the Northern Pacific Railroad as a Land Grant in the 1800’s isn’t protected in the same sense as the others mentioned above, as they are privately held and have had considerable environmental exploitation, such as clear cutting of lumber. However, given the large amounts of land involved and the generally focused use of these lands, they are effectively protected from unconstrained exploitation.

As population density in the U.S. has continued to increase, the awareness of the need to preserve our natural lands for the future has also increased. This has resulted in an increased level of protection for many of the public lands in Montana. 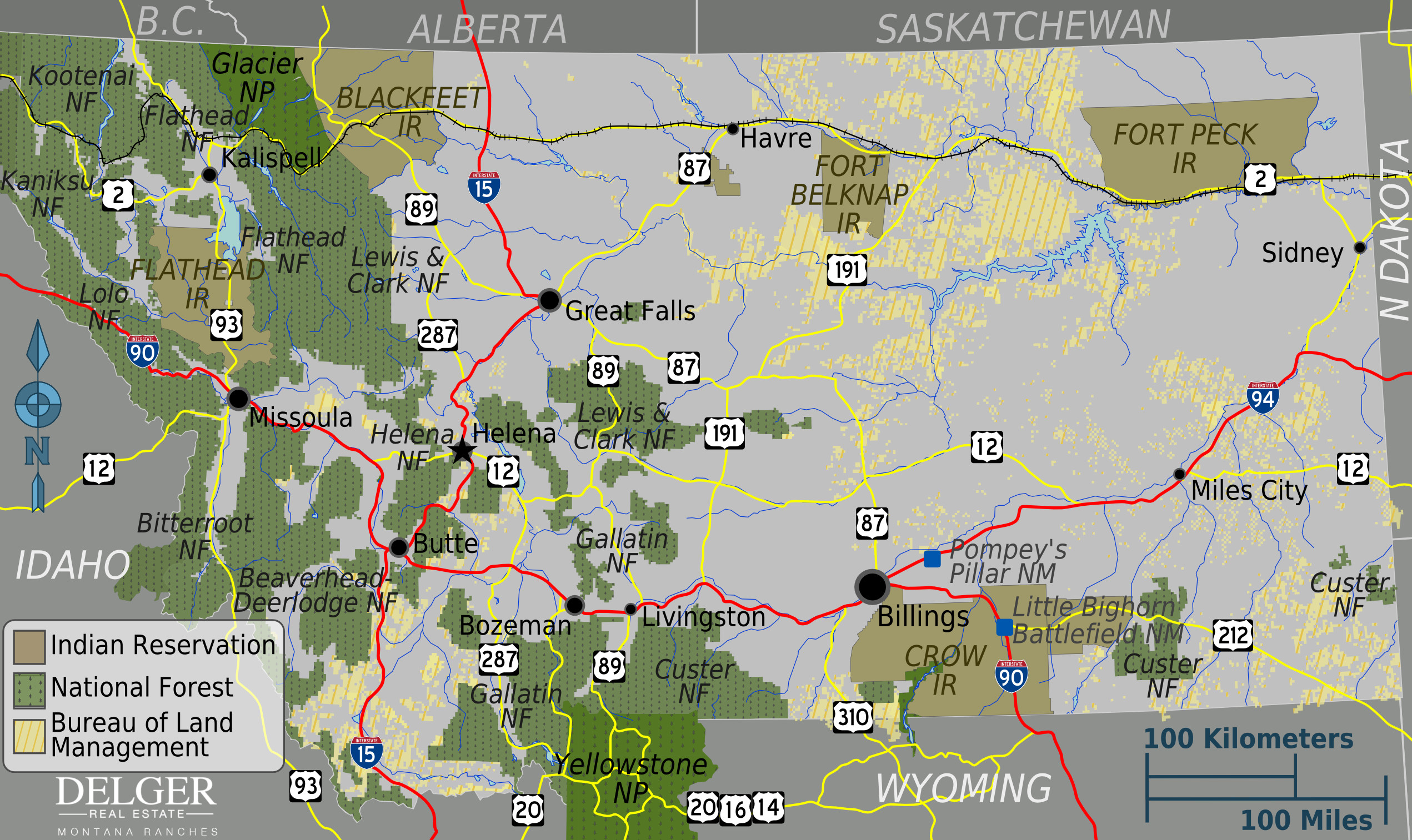 All MLS Information ©Southwest Montana Multiple Listing Service, Inc. All rights reserved. MLS information is provided exclusively for consumers' personal, non-commercial use and may not be used for any purpose other than to identify prospective properties consumers may be interested in purchasing. Information is deemed reliable but is not guaranteed accurate by the MLS or Delger Real Estate. By using this website you agree to the terms. We protect your personal privacy and email security. View our privacy policy.
Delger Real Estate - 3960 10561 Bridger Canyon Road, Bozeman, MT 59715.
Delger Real Estate™, Ranch Real Estate Group™ and Bozeman Real Estate Company™ are trademarks of BriteWire, Inc.

Please enter the information below.
We will contact you shortly.

This feature requires you to Register.

Register For This Site

Don’t worry, we make it easy and won’t share your information with anyone.

← Back to Ranch Real Estate Group