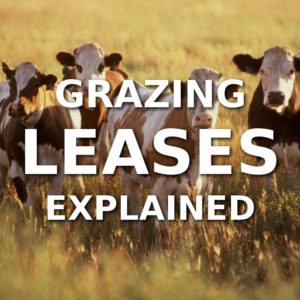 Buyers of ranch land in Montana are frequently interested in Federal, State, and Private grazing leases that accompany the property.

What is a grazing lease?

A grazing lease is an agreement in which a landowner allows a tenant (the person who leases from the landowner) to graze livestock on the landowner’s property. Typically, the tenant will pay the landowner some cash amount in exchange for the use of the land and the forage it provides. That cash amount can be determined in a variety of ways and may not be the same from one year to the next.

What is an AUM(Animal Unit Month)?

An AUM or Animal Unit Month is the amount of forage needed by an “animal unit” (AU) grazing for one month. The quantity of forage needed is based on the cow’s metabolic weight, and the animal unit is defined as one mature 1,000 pound cow and her suckling calf. For other livestock the AUM is defined as one horse, or five sheep or goats for a month. Animal Unit Month is a common measurement for determining grazing lease fees.

How much do grazing leases cost?

Grazing lease rates can be estimated in a variety of ways,
including:

Federal and State grazing fees are a contentious topic.

Federal and State grazing leases typically use an AUM or Animal Unit Month to determine the lease rates. Federal grazing fees from the Bureau of Land Management and U.S. Forest Service are typically lower than other federal agencies and state agencies. The Federal grazing fee for 2015 was $1.69 per AUM. Private land grazing fees vary but average about $20 per Animal Unit per Month with some areas of the country costing over $40 per AUM.

However, grazing on public land has additional operating costs like maintaining fences and water that can be expensive. On private land that infrastructure is usually included in the price. Grazing on public land may also include legal fees and costs of permit renewals associated with public lands.

Montana Grazing Rates are determined by a formula which calculates the Animal Unit Month, previous year’s price per pound of beef cattle marketed in Montana, times a multiplier that is set by the Montana Land Board. The Land Board attempts to set the Montana grazing rate at 70% of the private lease rate in Montana.

The 2015 grazing rate for Montana was calculated as follows:

Grazing Leases for the state land in Montana have a 10 year term.

All MLS Information ©Southwest Montana Multiple Listing Service, Inc. All rights reserved. MLS information is provided exclusively for consumers' personal, non-commercial use and may not be used for any purpose other than to identify prospective properties consumers may be interested in purchasing. Information is deemed reliable but is not guaranteed accurate by the MLS or Delger Real Estate. By using this website you agree to the terms. We protect your personal privacy and email security. View our privacy policy.
Delger Real Estate - 3960 10561 Bridger Canyon Road, Bozeman, MT 59715.
Delger Real Estate™, Ranch Real Estate Group™ and Bozeman Real Estate Company™ are trademarks of BriteWire, Inc.

Please enter the information below.
We will contact you shortly.

This feature requires you to Register.

Register For This Site

Don’t worry, we make it easy and won’t share your information with anyone.

← Back to Ranch Real Estate Group